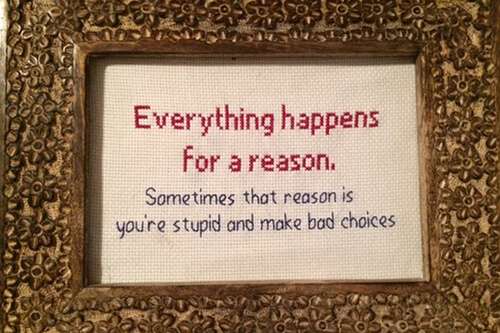 I always thought that the common belief that everything happens for a reason, and that eventually, you will start connecting the dots, is pseudo-intellectual bullshit sold to the masses for big bucks by Tony Robbins and others alike. And now, I am starting to wonder.

Life at graduate school can be tedious and uninspiring. You have your role to play in this big organism called a research institute. And, you have your weekly routine, which basically means that between all the distractions, such as meetings, travels, attending other people’s seminars, preparing your own seminars, joining lunches and welcoming people knocking at your door, you are expected to produce new knowledge. You are also expected to be both creative and precise at it, stay at the frontiers of your research field, and be able to present the progress to your supervisor roughly once per week. This lesson of self-management is a tough call for most people, and it usually ends up with sick leave at some point. Which happened to me as well.

Anyways, among the population of poor, troubled PhD students there are also subclasses, or, if you prefer to call it by name, different circles of hell. Around 90% of PhD students around me, were experimentalists.

If you do experimental research in human neuroimaging, this basically means that you go through some standard thought process and report the results. How does this thought process look like? First, you need to read the literature related to your topic of interest. As a dummy example, let us say that you are interested in how images of different tasty fruit are represented throughout the brain, from the visual cortex which analyses the image to basal ganglia where the reward system is located. So you have browsed for available literature and you have found that so far, there was one study that reported brain response to images of apples, and there was one study that reported brain response to touching and smelling apples and oranges. These two studies had partially overlapping results. Now, on the basis of this knowledge, you can pose a few research questions, each of them being a material for a potential new research study:

(1) does the brain response to fruit depend on the way of presenting the fruit? If in the same group of subjects, we compare brain reaction to watching photos of apples versus touching versus smelling, versus tasting apples, how will the maps of brain activation compare?

(3) does the brain response to apples depend on external circumstances, such as whether or not you are hungry, or when during the day you are presented with apples?

(4) does the brain response to fruit depend on the order of presenting fruit?

(5) are the results of the previous studies valid? What if we replay the same experimental paradigm on a better fMRI scanner and a large sample of subjects?

So, what do you do then? You can do the following: (a) wrap up your research proposal and get a thumb up from your supervisors; (b) recruit participants for the study (typically, right-handed male adults in certain age range in order to avoid gender- or hemisphere- related cofounders), (c) use one of the available software packages in order to develop the experimental setup, (d) book the time in the scanner, (e) do the actual study, (f) preprocess the data in order to clean it from noise, and analyze the group differences with the standard tools, (g) report the results in the form of a manuscript, starting from origin of your research question and ending with conclusions and recommendations for future research.

A few years back, null results (no apparent differences between the studies groups) was still a sort of a problem – as research journals were unwilling to accept manuscripts reporting those null results (viewing them as a sort of “less attractive” material). These days, it is not as much of a problem anymore as acceptance rates towards null results grew in recent years, and preprint services allow for posting citable manuscripts even without peer review. Actually, in order to defend a PhD thesis in the Netherlands, you need to present four pieces of science that are potentially publishable. So, if you design a few studies to approach the aforementioned five research questions, it should be enough for you to graduate from a PhD. I would not say it is easy but it is certainly algorithmic.

But, there is also a second circle of hell: PhD candidates who develop new methods for data analysis. I (a bit involuntarily) found myself in this particular category. How does designing new methods differ from doing experiments then? In principle, if you design a new method for data analysis, you need to propose a new, better solution to an existing problem – rather than just ask a question and present an answer to this question regardless of whether the answer is ‘yes’ or ‘no’. So, first, you need to spot some gap in your research field. In my case, this gap was the lack of efficient methods for rendering effective connectivity from fMRI data. Then, you need to read the available literature and make some simulations in order to better understand what are the reasons behind this problem. In my case, most of the reasons behind the lack of efficient methods were lying in the inherent weaknesses of the fMRI data: poor time resolution of fMRI recordings, low signal-to-noise ratios, and slow hemodynamics response which causes that the (already poor) signals are further lowpass filtered. Given all this information, you need to propose a novel solution to the problem, which is qualitatively and quantitatively better than the existing solutions. It is not enough to propose something that is just different than existing solutions and then apply it to brain data and compare/contrast results with former methods. People in your field are already using other solutions, so you need to convince them that your solution is better in at least one use case – otherwise they will see no reason to pick up on your method and start using it. For instance, you can simulate a synthetic data with high levels of background noise, and show that your method is better than other methods in retrieving causal structure of the connectome, given such a high-noise regime. Then, once you have ‘your product’, you need to write down a manuscript containing at least one killing figure showing clearly how your method outperforms the competition. Lastly, you need to close your manuscript with the discussion, suggesting a number of use cases in which your method is recommended as a method of choice. It is also good to disclose or propose further research directions, given the results presented in the manuscript.

Designing methods is hard. When you start reading about the problem, you rarely have an idea for the solution from the start, and it is a creative process that is hard to plan as it usually requires some ‘eureka‘ moment. Even if you have an idea, and even if it works well, it is usually hard to publish a manuscript containing a new method: when you send your work to a research journal, you will most likely get reviewers who are already established in the field, and they have their own methods published, so they have no business in letting you in and will most likely bash your idea. It is very common that you need to send around some methodological manuscript to journals five or more times before having it published. And when it is published, no guarantee that other researchers will actually pick it up and use it in their own research practice. Many methods are forgotten even though they are actually good, only because they went unnoticed or because they were not adopted out of convenience.

So yes, this was a stressful job for me. I saw other students just planning their experiments, going for it, reporting the results, publishing, going to vacations, graduating in time. While I got a hard research problem to solve, and I was left alone to solve it and graduate, or fail and have a huge problem with graduating. And my head was occupied with this problem 24/7. It was a huge burden to me for these few years, and I felt it was very unfair that I am going to receive the same professional title as everyone else given that I had so much more stress to carry on my shoulders, and so many more hurdles to jump over.

But now, when I look at businesses of my friends, I start seeing the positives: conceptually, writing business plans does not differ much from what I was doing as a researcher. You always need to spot on the market gap, come up with a solution that solved some problem, and sell it well to your audience so that they see its value as well. They need to be convinced that your solution is good enough to try it, even given the inconvenience of changing their current providers. The main differences between brain research and open market, are that the currency is different here (publications & citations versus bucks & shares), and that open market is much ore diverse and much closer to the society – which makes it much more interesting to me.

So, this is how I became a business developer – without even knowing it.